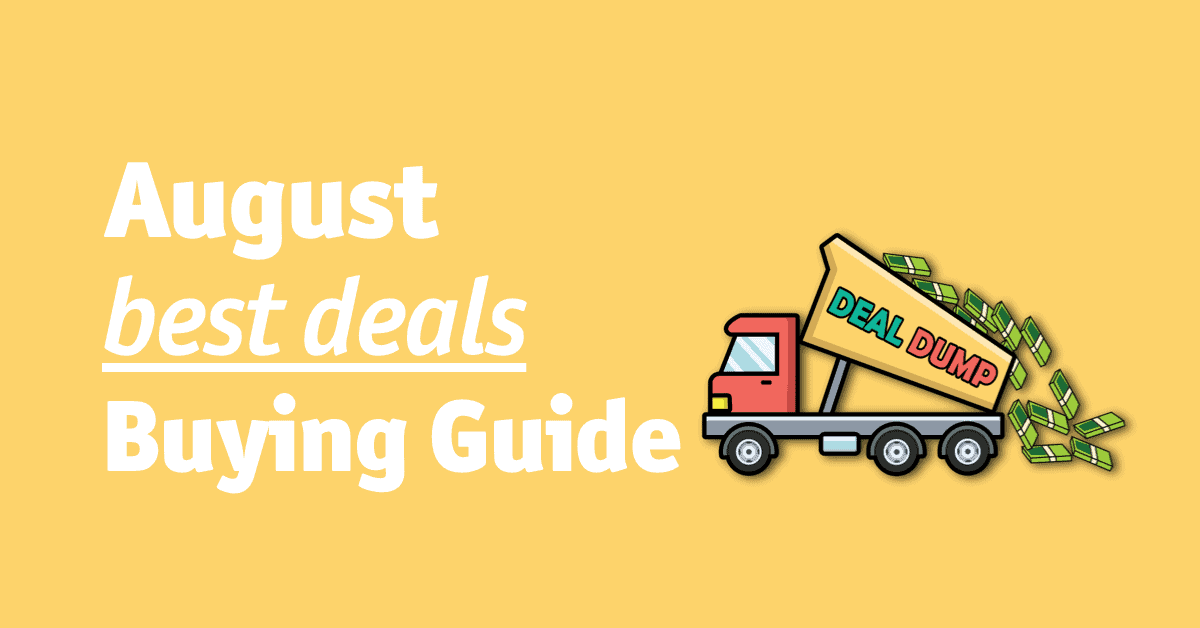 Back to School means some steals for your pocketbook!

August is surprisingly short on holidays and celebrations, but that doesn’t mean there aren’t deals to find. You need to know where to look. That’s where we come in!

While there are tons of fun little holidays- everything from Son and Daughter Day to National S’more Day, there’s nothing really big on the retail holiday front.

Do watch out for the tax holidays in your state, as they can net a bargain or two, but for the most part, your bargain shopping this month will be all about smart timing. Summer’s almost over, but there’s still time to dream and plan for next year.

Most people have packed away the luggage, and such travel plans are looking more towards the end of the year. Retailers, meanwhile, are starting to plan out fall and winter stocks. The Month of Summer is pretty much over, but you’ll enjoy bargains none-the-less

It’s time for you to leap into the middle and use your smart shopper spider-sense to filter the great deals out of this quiet month.

Savvy shoppers know, however, that you don’t just buy without doing the research. We do the groundwork for you, so you don’t have to.

With our handy month-by-month deal guide to all the info, Amazon doesn’t want you to know, Dealdump’s Monthly Buying guides will keep you shopping smartly.

Discover where all the smart deals are every month and what you should hold back on buying this month.

From planning smart shopping sprees to keeping those bargain boxes arriving on time, we’ll make sure you have all the information you need to keep your cash in your pocket without sacrificing your lifestyle.

So welcome to August. Let’s find out what deals you can expect, what to find at the lowest price this month, and how not to spend your hard-earned bucks.

Summer’s almost over, but that doesn’t mean your deal buying has to be! In fact, this is the perfect month to take advantage of the very last of summer and restock all the goodies that were too expensive during the hot season.

From air conditioners and patio furniture to a new bikini, don’t hold back! This is also the very best time of year to work on you and your kids too. From setting up a spiffy home office to reorganizing the home and packing the kid off to college, you’ll pick up everything you need.

Younger family members can look forward to cool back-to-school stationery deals, and you’ll want to take this time to stock up on clothes for the growing little ones, too.
Now you know what August Amazon deals to look out for, let’s dive into the details.

Deals to buy in August

Let’s get to work! What do you need to add to your shopping list this month?

Time to get planning for next year’s beach body! July had a few swimwear deals, but this is the month where you’re going to see summer clearance sales all hit your listings. So pick out a suit that flatters, and be ready for the good bargains. Say no to paying the retail price!

It’s time to net the best deals on all things school-related, so school supplies are where you want to focus. Amazon truly is your best bet for great school deals, especially if you have to stock up for several kids or like to be prepared.

As an offshoot of this focus on gearing kids and young adults back up for the school season comes nice discounts on children’s clothes and shoes as part of the school sales. Don’t be afraid to take advantage of the deep discounts on offer!

If you’re still struggling to carve out a niche for yourself at home, look sharp! This is the month where you’ll find great deals on things to make your home office feel great. Of course, it’s another offshoot of the back-to-school push, but who said adults couldn’t have some fun too?

If you’ve been sweltering through a long, hot summer with no relief, it’s time to get an air conditioner bargain you’ll love. The demand is finally down on outdoor items, and you know what that means- when demand goes down, so do prices!

With so many kids getting ready to head back to college, this is also a great time to plan your home organization. So naturally, vendors will be trying to attract your attention, so not only will great deals abound, but you’ll see some new products on display too.

This is the month where outdoor furniture and lawnmowers will finally go on sale, too, as the demand decreases. So while you probably aren’t all that excited about lawn maintenance, you’re sure to find a deal that will make you feel a whole lot better about your garden.

It’s finally time to find sweet bargains on your future summer wardrobe! You’ve waited patiently all summer long, and now you can benefit. So go ahead and buy yourself something nice to spoil yourself for summer fun next year!

The one exception to the tech embargo in August is the chance to find a nice laptop deal or some cheaper desktop stations- especially if you don’t mind a slightly older model.

Not only will there be deals for the Back-to-School market, but September/October is typically when we see movement on new products from Intel and other PC makers, so you’ll typically see a push to clear old stock.

Of course, if you have to have the latest and greatest instead, no matter the cost, you may want to wait until a bit later in the year. But that’s not you, savvy shopper…right?

Not really a market Amazon is known for, but now is the time to snag early fall wines- and you’ll often see exciting offers on accompanying paraphernalia, too.

Here’s a nifty little August bonus to know about. Some states run their sales tax holidays at the very end of July, but you’ll mostly see them this month.

Of course, tax-free doesn’t mean the best deal, especially when compared to online vendors, but it’s worth having a look in case you see something at a steal!

What not to buy in August

With your August Shopping list Primed (pun intended), for what products is August a bad time to buy?

Sadly, you have likely missed Prime Day at this point.

It’s worth checking- they do move it around a little, and there’s some pressure to make it a bi-annual event- but unless you’ve got lucky on the dates, you’ve probably missed out. We hate to deliver bad news, but you’re not going to see a single tech deal between now and Cyber Monday.

There’s one small exception to this rule- laptops. Because of the push to get older kids set up for school, you may still sniff out a good bargain here. It likely won’t be a huge discount, but it’s still worth considering.

The time to buy a mattress was last month for the Independence Day sales, and it’s pretty universal across the board on kitchen appliances, too. Even littler items like coffee machines and blenders.

The next big time to snag a deal here isn’t far off, though- Labor Day will see another run of great deals. So, for now, just live with that rattle from the dishwasher, or it will be your bank account rattling instead.

As always, it’s never a good idea to buy in-season. So unless it’s vital, hold off on buying fall clothing until the end of the season and find some nice things to inspire you to hit the gym for next summer instead. Of course, they will be on massive discount to clear space.

Even if you’re a dedicated Apple fan, you can wait one month.

We typically see any exciting product release events Apple has up its sleeve, especially for the iPhone and Apple Watch, going into September/October, so if you buy now, you’ll risk being the sucker who buys last-gen tech at top price instead of the upcoming sale price.

In fact, smartphone deals, in general, will be scarce for now. So rather wait for the price drop later in the year.

We’ve got late enough in the year for retailers to be eying Cyber Monday and the holiday season in general, so they’re trying to keep their stocks up. So if you need a new TV and missed Prime Day, rather try to hold on until later in the year.

So, while your gadget lust and home may have to wait for better days to come along, this is a great month to get yourself and the kids set up for school and work. From organizing your home to getting a great home office set up, you’re covered.

So send the kids to school in new clothes, and indulge your stationery love. It’s also a great time to stock up on summer-related clothes and items, ready for the brighter days of next summer- and Amazon Black Friday deals later in the year, too.

While August is short on holidays, it’s got plenty of deals to keep you feeling great. Don’t forget that the DealDump experts always have your back, too- check back next month for some September deals you can’t afford to miss!