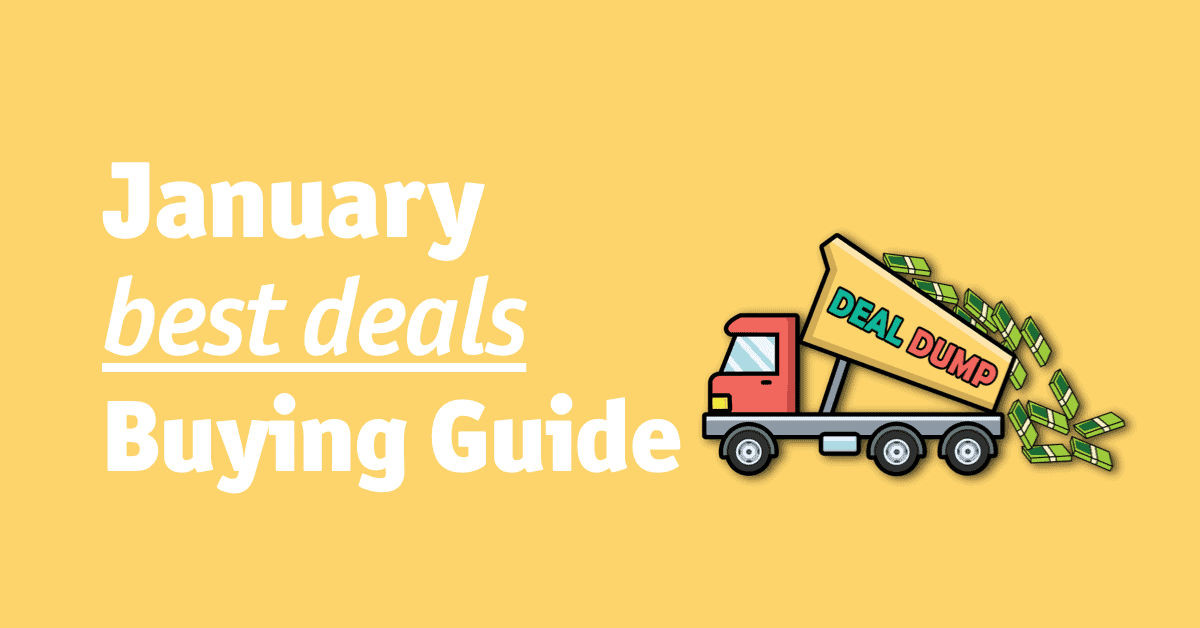 Start the year off right with exciting deals

January may not be the favorite financial month of the year for many people, coming as it does after the excesses of the year-end, and budgets are typically tight. That doesn’t mean that our smart DealDump shoppers won’t find plenty of great savings this month, however!

For most people, January 1st brings a sense of newness and opportunity, with a whole new year unfolding in front of them. It’s a time of New Year resolutions and promises to be better than ever. We can’t promise the year will bring everything you hope for, but we do promise one thing- DealDump will be here with our smart shoppers monthly buying guide every step of the way.

This is also the month of frugality, where people who overspent a little in the Christmas rush have to get down to some serious budgeting to make it to the next payday. Shops are aware of this, of course, so we often see some very basic deals go up. Unexciting? Maybe, but also very useful. And the post-festive season sales are well worth a look too. Martin Luther King Day is a notable landmark in the month, though not sales-orientated. Otherwise, it’s full steam ahead to get through the month with as much left in your pocketbook as possible.

Smart shoppers know, however, that the key to a tight budget is planning. That’s why DealDump is here, to take the work out of it for you. We keep an eye on the monthly trends and sales fluctuations so you can simply save and save. January may be a quiet month as we all deal with our expanded waistlines and tight budgets, but we’ll help you sniff out every bargain, chase down every low price, and shop to you drop without breaking the bank. That’s the DealDump promise, after all!

Hello January, and hello New Year. It’s time to sniff out some deals as fresh as the anticipation in the air-while keeping your limited budget tight and trim until payday comes along.

What deals does January hold?

January is a blah month for many people. The happy craze of the holiday season is done, and you’re back to picking up the pieces. Work is starting, families are departing back to their homes, and it’s cold outside. If you overspent last month, the budgets are tight too. And people everywhere are going on about ‘no buy’ January to guilt you. There’s not a lot to love.

The retail market feels the same. Most of your January discounts are focused on clearance from the buying frenzy, so there’s not a lot of novel or different deals to be had, and many of them involve picking over what’s left from Christmas. You might be able to find a few motivational home organizational or fitness and wellness deals, but make sure you’re buying because you want them, not because of New Year’s resolutions you’ll regret by February.

However, if you’re a savvy DealDump reader, it’s time to shake it off. Now’s a great time for slow and steady change- the best sort. Grab something fun for the playroom, shake up the carpets, furniture, and rugs, and grab some cozy winter bedding (but not beds) so you feel better on the long winter nights. Grab a nice new wardrobe for work, and hey- this is the one time of year you can shop seasonally without getting premium prices, so find something fun to wear for play too. And look forward to the deals on the Martin Luther King 3-day weekend later this month.

January’s here, but that doesn’t mean you have to miss out. Let’s go find those January deals!

What to buy in January

What deals are hot this January? Let’s take a look.

With the holiday season complete for another year, retailers are keen to get holiday decorations off the shelves. What does that mean for you? Juicy deals! So if you’re keen to stock up on gift wrap or refresh your decorations, it’s time to shop the sales.

Did you know that White Sales originated in January 1887? That’s why it’s still the best month to find amazing deals on household linens. It doesn’t matter if you need a new duvet or want to redecorate the bathroom, now’s the time for a steal on sheets, towels, and other linens.

Most stores way overstock their toys during the December buying frenzy. That means, come January, they’re eager to get those toys off the shelves- and they’re happy to give you great deals doing it. If you’ve got little ones or want to pick up some great deals for birthdays through the year, now’s the time. You only have a week or so around the start of the month, however, before the deals are done, the stock is cleared, and toys go onto the ‘don’t buy’ list.

It’s sad but true- most people’s ambition to start working out lasts about one week in January. On the plus side, if you’re trying to build a home gym, love fitness gear,  or simply want a few pieces of fitness equipment to help with your own goals, the end of January is a great time for deals to help you meet your fitness goals.

You may be super surprised to see us recommending clothing that’s still in-season! There’s always an exception to the rule, and this is it. Many shops stock up on hot and trendy winter clothing for the holiday season buying frenzy and need to tame the overstock and unsold items in January, so you actually have a good shot at some sweet clothing deals this month.

In the market for new flooring? There was a ton of movement on home decor in the holiday entertaining period, and that means January deals for those who were able to hold off on buying. So if you want a facelift for your home to beat the winter doldrums, now’s the time.

It’s a great month for TVs on sale- possibly even better than the much-hyped Cyber Monday sales. And there’s no caveats, either. From the latest Amazon TVs and smart tech with premium features to basic models,  a wide range will hit the sales this month in anticipation of the Super Bowl next month, where we will see the biggest discounts.

Suits and professional attire, alongside workman’s clothing and boots all typically go on sale for a bit in January to help those moving into new jobs top up their wardrobes. So if you want to get a fresh start on the working year (or neat to beat the holiday season bulge), now is an excellent time for good deals.

This is the best time of year to buy expensive baby goods like strollers and cribs at the lowest price. Many people like to expand their family with due dates intended to make the mama-to-be comfortable, so the midwinter doldrums don’t see many people gleefully shopping for new family members. There’s also some year-end overstock to clear. If you’re expecting, or know someone who is, you might want to plan to buy now for the sale price, even if the due date isn’t until later in the year.

Traditionally, new furniture models roll out in February. This means retailers offer enticing deals in January to clear up space. If you’re in the market, it’s time to move.

While it’s not one of the holiday weekends you probably associate with shopping, the long weekend makes it an attractive sales date for deep discounts, especially at big-box retailers. And when their prices drop, so do Amazon’s and third-party sellers. You may even see Amazon Warehouse deals go up. So keep an eye out for goodies you want to splurge on towards the middle of the month, there may be nice deals.

Things not to buy this January

Now you know where the January deals are, let’s look at what not to buy in January.

If it’s an emergency, you might find some mattress sales around the long weekend at Martin Luther King Day, but With President’s Day not far off, and the Labor Day and Memorial Day sales to shop for the lowest price on mattress deals, you’d be a lot better off waiting.

Don’t let the holiday bulge make you foolish. Gym memberships are at a premium in January, as they know eager New Year’s Resolutions will drive people to buy. Even if you know you’ll use the subscription, wait until next month for better deals, and remember to keep your credit card details to yourself when hassled by salespeople.

You’ve missed the best window on electronics and gadgets, including laptops and smartphones. The best times of year for steep discounts are the back-to-school sales and the year-end sales, so unless you’re desperate, hang on to what you have for now.

This does have a bit of wiggle room, as you might see some sales to capitalize on the New Year’s Resolution crowd too, so don’t be afraid to place an Amazon alert on anything you want to keep your eye on  in case there’s a sale price to be had. However, in general, prices stay high at this time of year because they know many people will be buying, so treat organizational tools carefully this month and only buy from special sales.

Resist the sparkly jewelry temptation for one more month. At the moment, retailers will keep prices steady in the hopes of early buyers paying full price. However, in the week before- and most especially, the weeks after- Valentine’s Day next month, you’ll see all the steep discounts your heart desires.

It’s no one’s favorite month of the year, but January needn’t be glum and boring, and there’s no need to pay retail price. Now you know where to find the hottest deals, there’s a lot of joy to spread around even if you’re back on the road to work again.

Brighten your winter with a focus on your home and making yourself and your loved ones smile. Warmer times are on their way, and in the meantime, you have some stellar deals to keep the days turning over.

February has some exciting luxury deals to look forward to, as well, so there’s plenty of opportunities to treat yourself coming soon.

Let your New Year’s Resolution this year be becoming a smart shopper with DealDump, and you’ll be winning already! We’ll see you next month for our February guide.