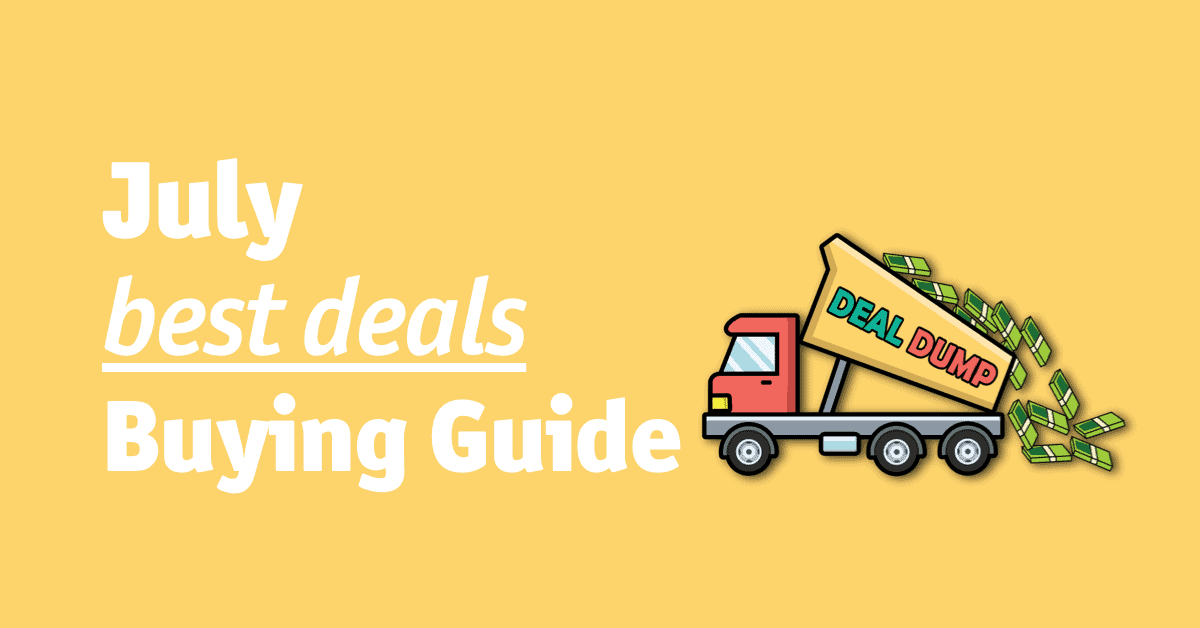 It’s midsummer, and the deals are easy….

While July 1st is best known to our neighbors in the North as Canada Day, there’s no more iconic holiday than the fourth of July for everyone in the United States.

With this patriotic theme taking us into the month, there’s also the infamous July 14th, Bastille Day, to look forward to for some of our French-extraction citizens.

But it’s not all about patriotism, revolution, and political drama. This is also National Watermelon month (what a delicious taste of summer to enjoy).

In addition, we see fun ‘holidays’ like World Emoji Day and National Day of the Cowboy add some whimsical fun to the list.

These are the Dog Days of Summer so beloved of pop musicians and nostalgia-freaks everywhere, and it’s time to enjoy every moment of them.

Worth noting for deal-hungry shoppers, July 2nd has been styled as ‘Made in the USA’ day, and some matching deals will be about. Check out the product details to see if it’s a US-made item.

This is a huge month for sales in general, so keep your eyes peeled!

While it is often at the end of June (and occasionally even September), this can be a host month for the famous deals of Amazon Prime Day, so be sure to check out the dates for this year.

Like the smart shopper you are, you know that you don’t just jump in without a plan. Luckily, we do the research, so you don’t have to.

So instead, let our convenient month-by-month breakdown keep you in the loop for the deals Amazon doesn’t want you to know about. Dealdump’s Monthly Buying guides will make sure you never get it wrong.

You’ll get to know what you can buy for a great deal each month and what purchases to put off until a better time. Make sure you plan your bargain hunting like a pro and keep the deals rolling in without straining your pocketbook.

So welcome to July. Let’s find out what deals you can expect, what to find at the lowest price this month, and how not to spend your hard-earned bucks.

So, what’s great about July deals?

Independence Day really is the sales event to watch this month, and most of what’s worth focusing on come very early in July because of it. It will be your one-and-only in-season chance to snag nice discounts on summer appliances, patio furniture, grills, and other summer-themed items at a bargain.

Clothing is out in all its forms, but it’s a great month for DIY, paint, and tools. Folks looking for a great night’s sleep are in luck, and if you’re a jewelry lover, this is the time of year to shop that the stores don’t want you to know about.

They’d much rather you take higher prices during the holiday shopping season.

All in all, July comes with pride, patriotism, and some intriguing deals on sought-after products. So let’s dive deeper into what has to make your deal list this month!

What to buy in July

Let’s get straight to it! What great deals on Amazon can we expect in July?

Buying clothing in-season is generally a no-no. However, this month, we have both the official height of summer and Independence Day, where sales are massive.

So rather than shopping for a general summer wardrobe makeover, rather keep your eyes fixed on specific prizes from your favorite retailers, who are bound to go for massive discounts over the July 4th period.

A key exception is a swimwear, which will see some excellent bargains as retailers start clearing stock for fall lines. Also, while it’s not really the best time of year for it, summer will see some shoe sales, too, as retailers want to get some money flowing before the winter slump.

Got a home project to complete? Then Independence day is your friend for finding the lowest price possible. Home Depot and Lowe’s offer annual sales to coincide, and smart hardware retailers follow suit. This lets bargain hunters like yourself jump on great deals.

It will cover everything from paint to new tools, so keep your eyes peeled! Remember that paint stores well, too, so even if you’re planning on renovating later in the year, now is the time to buy. Unfortunately, these tend to be pretty pricey over the holiday shopping season.

Of course, Lowes, Best Buy, and Home Depot aren’t just known for hardware! This is the season to go shopping for kitchen appliance sales, and you can expect reductions of 40% and beyond on the sticker price due to the fourth of July holiday sales.

This should cover both large home appliances like dishwashers and dryers, but also smaller kitchenware like blenders, coffee makers, or that air fryer you can’t resist. So if your home needs a facelift, now is the time to get clicking online.

Remember it will be limited time over the holiday weekend, though, so be ready to spring on good deals.

4) Patio Furniture and Outdoor Living (but wait if you can)

In a very similar vein, this will be your one chance in the summer season to snag a good deal on the stuff that makes the outdoors fun, like patio furniture.

The window will be short, all hinging on Independence Day picnics and BBQs, though, so get cracking on this one fast if you’re looking for summer furniture deals.

Air conditioners often also go on sale for the same reasons. If you miss a good deal early in the month, rather hold off for a bit, as the deep deals will come in the following months.

What would that outdoor living be without a juicy burger from the grill? As with all-things-outdoor-living, you’ll have a small window around independence day to get smart deals on the grill and BBQ bargains you didn’t find at the end of last summer.

This one always surprises people- but mattress retailers like nothing more than a blow-out holiday weekend to put their stuff on sale. So now’s a good time to look for your next mattress and any related accessories you had your eye on.

This may be deep discounts, free stuff, or even free upgrades to better sizes.

We may be a bit early on this one, but it’s worth adding to your watch list. We always see laptop deals when we get Back-to-School hype.

It’s a little early for that- August is your main deal-finding month- but the end of July will see some early back-to-school deals, and laptops could be among them. Gaming consoles, however, will not be, so wait on these.

If your house needs a little love, there’s no better time than the present. August will see new lines launch in a semi-annual warehouse window, so July typically sees deep discounts on furniture in order to clear old stock.

This one takes many inexperienced shoppers by surprise, but July is a great month for jewelry shopping. It lies between Valentine’s Day rush and the Festive Season lure, and most jewelers see their sales in the doldrums right now.

So what does that mean (YMMV) for you? Deals, deals, everywhere!

With Independence Day dominating the month, there’s no surprise that now is the time to celebrate the Red, White, and Blue to their fullest. So if you’re looking for flags or just general fun patriotic items, now’s the time to capitalize on the mood and get a great bargain.

What products to skip in July

Now we know where the best bank for your buck lies on July deals. So let’s take a look at a few things to leave out of your shopping cart, too.

You’ll notice this one pitches up on our guides a lot, but that’s because it’s a cornerstone of shopping for smart deals. If you’re in the season, the chances of a good bargain are near non-existent.

But, of course, that doesn’t mean slacking off- keep your eyes on your favorite clothing retailers, as some ‘mid-season sales’ do happen at midsummer, as retailers start looking ahead at fall lines.

For the most part, however, you’re going to want to avoid filling your summer apparel gaps unless you have to. Of course, this goes double for children’s clothes, where we’ve got some scope for great ‘kid deals’ coming in the months ahead.

This piece of bargain-hunting advice does depend a little on when Amazon Prime day falls, but if it was at the end of June, July is a bust for tech deals. The only thing you may spot is some smart laptop deals on early bird deals for back-to-school.

Almost, but not quite, my friends! As the end of July draws closer, shoppers could start seeing ‘discounts’ on fall clothing to lure them in, but you’re generally better off waiting until lines have been out a while before you start buying.

So rather postpone this one until the Labor Day weekend, instead.

You’ll notice that there’s not much specifically on our ‘skip’ guide for July- but that doesn’t mean you can’t fall into the buying trap!

Bear in mind this is the midpoint of Summer and the ‘best of’ vacation time for many folks in the USA, so it’s a slow and languid time all around.

Other than the items we’ve covered in our Amazon deals section for the month, there’s not much exciting going on in the retail world once we pass the Fourth of July weekend.

Independence Day, however, gives you some chance at steals on Amazon books, Amazon Video, Amazon Music, and more, although we’d hold off on buying anything from the Amazon Alexa brand until later in the year.

So keep your buying plan to our ten juicy items to buy in July, and for most everything else, you’ll find a better time as the year waxes and wanes.

Jewelry and mattresses make an unexpected great deal, and it’s a good month for your home as everything from paint to furniture goes on sale.

You have a small window of opportunity to correct anything missing from your summer fun, and it’s a good time to plan for next year’s beach bod too.

If you missed out on the enticing lightning deals of Amazon Prime Day, savvy shoppers would have their eyes on back-to-school stuff and laptops, too, but patience…it’s not quite the time to bite. These are, however, upcoming deals to watch that will see price drops over the next few months.

Now you’ve got your monthly deal shopping out the way. It’s time to get back to the real business of the holidays- having fun! Just don’t forget to check back for Dealdump’s handy August Deals guide, too! It would help if you never hit the internet without it.