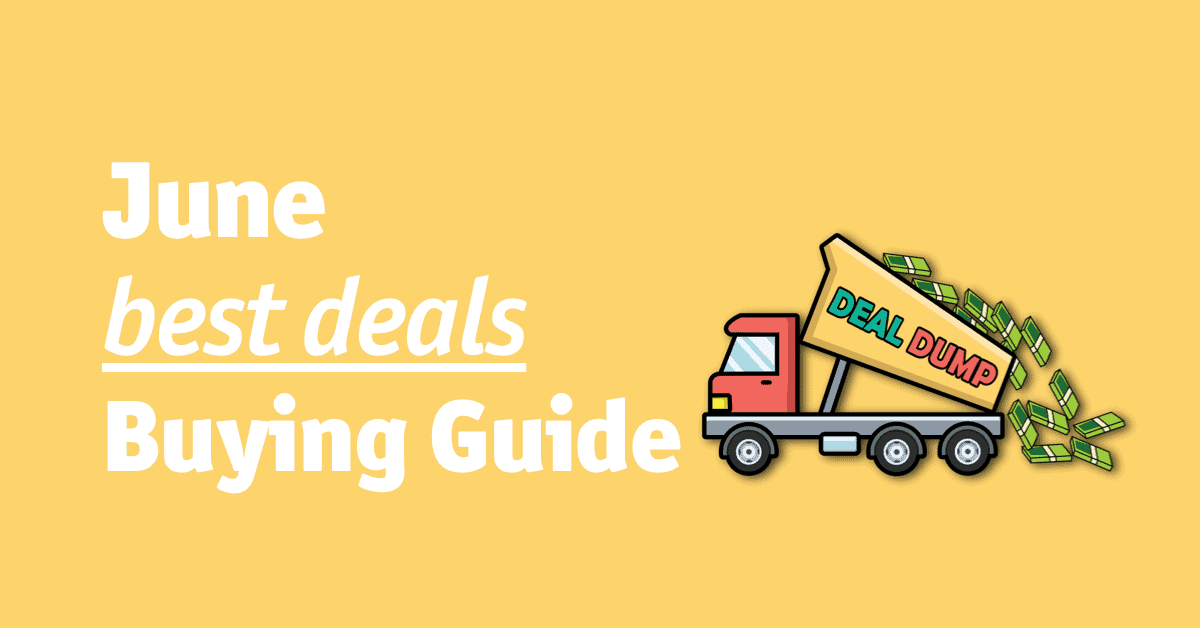 So, we’ve reached the heady depths of June, and we’re still smart shopping Amazon like a pro! This is the month where the tentative wisps of spring finally depart, leaving us in a full summer frenzy. Then, finally, the school’s out, and fun is in!

So, how do you get it at the lowest price possible?

We see plenty of summer activities kick in the right about now- including the official start of summer and the summer solstice on June 21st– so if you’re a sucker for music festivals, BBQ, and summer living, it’s time to get out there and find deals to match.

But, of course, it’s also time to let your Pride flag fly.

In fact, there’s also Flag Day this month if you’re in the mood for some patriotic savings before we reach Independence Day next month.

But if you’d rather stay home and snag a great deal or two than put your body on a beach or tackle holiday crowds, there’s a lot to look forward to in savings. Father’s Day brings us some macho-toned deals, wedding season gives us more enticing buys than just bells, and you might even get a whimsical pet-themed bargain for Hug-Your-Cat day.

Or free doughnuts on Doughnut Day.

Overwhelmingly this is the month of summer-themed deals, outdoor living, partying, gifts and gear. So get spending- the smart way!

Contents hide
The DealDump Buying Guide promise
What deals are hot (and not) in June.
Things to buy in June
1) Workout Gear
2) Something sexy
3) Bubbles, bath treats, and more
4) Skincare and sunscreen
5) Flatware and stoneware
6) Tools and DIY gear (maybe)
7) Games and (maybe) some tech- but only from Amazon
8) Spring AND Summer clothing
What not to buy in June
1) Electronics
2) Mattresses
3) Patio furniture and outdoor living
4) Grills
5) Swimsuits
6) Air conditioners
7) Designer clothing
8) School stuff
3) In-season clothing- normally
Conclusion
Related posts:

Savvy shoppers know, however, that you don’t just wade in without a plan. That’s why we’ve taken the time to do the groundwork for you. Although with our month-by-month breakdown of the deals Amazon doesn’t want you to know about, Dealdump’s Monthly Buying guides will keep you in the loop.

Find out what you can net a great deal on each month and what you should avoid buying at all costs. Then, make sure you plan your annual shopping sprees like a pro and keep the bargains rolling in and your hard-earned cash in your pocket.

So welcome to June- let’s find out what deals you can expect, what to find at the lowest price this month, and how not to spend your hard-earned bucks.

What deals are hot (and not) in June.

June means fun in the sun to retailers and us, but that doesn’t always mean great deals. If demand is high and supplies limited, you’ll get bitten. There are some surprising bargains to be had this month, however. Think lingerie, workout gear, and dishware.

June has also seen many semiannual sales among big-name retailers, from Victoria’s Secret and Body Works to Steam. Naturally, this always translates into price cuts among similar retailers, so prepare to shop these sales.

Keen to get the inside scoop on June shopping deals? Let’s dive in.

Things to buy in June

So what should smart shoppers look to spend this month if they want to find the lowest price?

The hype of the New Year has long since faded, but the looming specter of the beach is upon us!

Retailers know hiking their prices right now will discourage people with dreams of a bikini body, so they drop them instead- enticing you with the dream that your muffin top and those love handles will magically disappear in a workout or two if you take advantage of their biggest discounts.

While just buying the duds isn’t enough to guarantee you a smoking hot body in time for the holidays, it will help you get a smoking hot deal on any workout clothes or gym gear you wanted.

In stark contrast to the demand around Valentine’s day, you wouldn’t think there was anything extraordinary about June for finding that perfect something to tickle your favorite person’s fancy.

But historically, Victoria’s Secret would have a big blow-out sale this month, and many other purveyors of lacy lingerie follow suit to stay competitive. Time to get some deep discounts!

As with lingerie, June has traditionally seen some blow-out sales from beauty store staples like Bath and Body Works and The Body Shop, and it’s become an overall industry trend.

Summer’s a great time to stock up on bath products and even some beauty products, too, so keep your eyes open for great deals.

Following in the same vein as above, this is the month for skincare deals, especially on sunscreen. You may even see new lines launching with enticing savings. Do remember that, while a deal always feels great, sunscreen is important in summer.

So read the product details, use the star rating, and don’t buy this one solely on the price tag, folks! Remember, Amazon makes it easy to do a breakdown by a star.

Whether your beach body was doomed before it began, or you enjoy a big meal instead, this is a great time of year to snag those perfect kitchen dishes you’ve had your eye on.

Mother’s Day is fading in the rearview (but you didn’t really buy Good Ol’ Mom dishes, right?), and the wedding season will be getting into full swing this month. Even if you’re not getting hitched, you can enjoy big savings on dishware revamp.

But if you’ve got an urgent purchase that can’t wait- or an attractive bargain catches your eye- June often sees some Father’s Day-aimed tool and DIY deals you’ll love. Who knows- you may even get that woodworking project finished this summer!

7) Games and (maybe) some tech- but only from Amazon

We’re not contradicting our advice below. We promise. This is generally a bad month for tech and gadgetry, but Amazon Prime Day is their biggest annual event and always does bring a gadget-themed deal boom to the table.

The date varies but usually happens towards the end of the month, and will likely be your one good chance at the lowest price on tech deals for a while, so be sure to take it if you’re looking for some smart home devices and streaming devices on excellent deals.

This is also the time for Steam’s annual summer sale, and other PC game retailers follow suit too, so expect a gaming deals event to match.

Last- but not least- we have an honorable mention! Usually, in-season clothing is a great big budget-buying no-no. Retailers almost always mark up their in-season clothing, knowing they can fleece the unlucky buyer who didn’t plan.

Especially online shops like Amazon have the luxury of not having to swap floor stock in and out and don’t always have to offer a sales price on the stock.

This year is a little different, however. Clothing sales were depressed all through year, and the summer clothing market was one of the worst-hit. So who was in the mood for a hot new bikini or sassy shorts stuck in their apartment all summer?

Yey many lines had already pre-planned their summer fashion offerings before the economic landscape changed so abruptly. So what does that mean for you? Price drops and plenty of deals galore as they finally get to put these on the market and beg you to buy.

This is also the season to buy your spring clothing for next year along a more normal deal-seeking line. As the season draws to a close, retailers will be keen to give you the lowest price possible in return for you taking stock off their hands, and that’s always a recipe for a good bargain.

What not to buy in June

So, now you know where a smart shopper spends their dollars in June, what are some things to avoid?

Sorry, tech-heads, but it’s not to be. Don’t buy electronics in June (except Prime Day deals). School is out, and it’s taking good laptop deals with it. The New Year, the New Gadget boom has died down, and smart retailers are starting to build stock with Cyber Monday in mind.

You may squeeze a smart-home technology deal out of the DIY mini-boom this month, but all in all, skip the electronics and wait for the lowest price later in the year.

You missed the Memorial Day sales on this item, guys. The next strong sale for home ‘appliances’ like a mattress will be Labor Day, and you’re going to be hard-pressed to find a good deal in-between. So unless it’s desperate, rather save this until later in the year.

Take a look outside the window, folks! It’s a bit too late to go deal-shopping for anything to do with outdoor living, especially patio furniture.

So many people will be using the summer to upgrade their homes- and enjoy some quality time in the good weather- that demand is higher than availability, and retailers know that.

Sorry, this one’s also a bust. While some smaller grill accessories see good deals all through the summer season, the grill itself is in premium demand, and chances are you won’t see a bargain anywhere.

Same deal on this one. Sorry, folks, but deals are going to be thin on the ground for swimsuits right now because everyone wants one. So unless the only other option is going naked, hold off on buying a hot new suit until the end of the season instead.

You’re definitely sensing a theme right about now, aren’t you? Like all the goodies for summer fun, air conditioners are in high demand right now. And what does high demand mean? Not a deal to be seen- retailers like Amazon know they can demand what they like and still get customers.

Especially with a trend to DIY projects and home upgrades over summer, too.

Are you big into your slick threads? Hold off on brand-name clothing buys for just a few weeks. July has traditionally seen some sweet sales among big-name retailers, and you don’t want to be the person who buys full price only to see the lowest price pop up a week or two later.

School is out, but the deals aren’t in yet. You’ll still see most at their original price, and there’s no hope of a laptop deal for now. So this is another buy best delayed to late July, or even August, as you won’t get a fantastic discount until then.

Just a quick note here to remind you that it’s typically a bad idea to buy clothing in-season if you’re looking for the lowest price. So while this summer (and maybe winter) will be a little different, bear this in mind over time.

Rather opt to snag great bargains at the end of the season, ready for next year!

And there you have it! This is the month to treat yourself with something lacy or good on the skin, plan next year’s spring wardrobe, have some fun with tech and tools, kick start your gym motivation, or make the kitchen feel like home again.

Smart shoppers walk away from anything overtly in demand for summer, forget about school, and instead start planning some summer fun with their sweet new deals!

Now you know how to make the most of your summer spend, we’ll leave you to bask in the glow of all those great deals- don’t forget to check back next month for DealDump’s must-have July buyer’s guide! You’ll be lost without it!