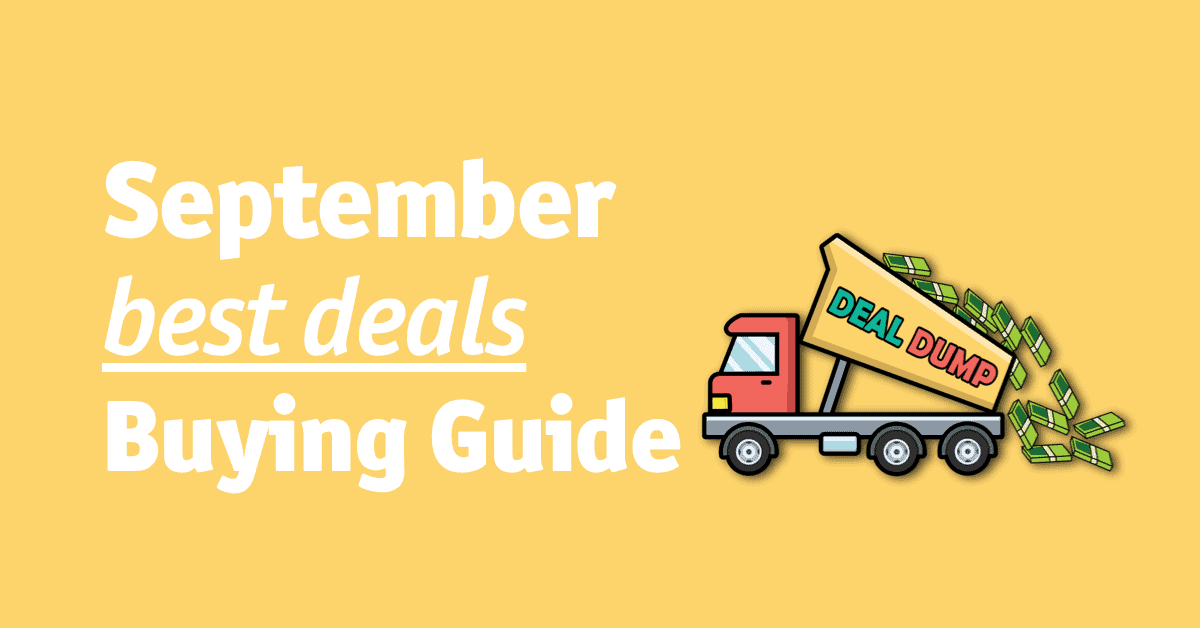 Labor Day Sales are calling you!

Ah, September. Even though the heady joys of summer are fading away, there’s a lot to look forward to. But, of course, for most of us deal-hounds, the big focus this month is Labor Day, as amazing Labor Day sales come with it.

Apple Fans also usually have the big announcements of any new ranges to look forward to, especially around the iPhone itself. There is, of course, the annual remembrance for 9/11 this month, and September 21st brings us the International Day of Peace, too.

It’s not just about holidays, though. Although the weather is on its turn to fall, this is a time of festivals and the last outdoor-focused fun for the year.

It’s a time where everything feels a little new and a little hopeful- and that’s the national mood retailers find conducive to offer deals. But, of course, it’s also the month of Oktoberfest for all you beer lovers!

Fashionistas will have their eyes firmly fixed on the New York Fashion Week to get a peek at upcoming trends, and college football is booming. In the meantime, the odd and esoteric are heading out to enjoy Burning Man, the last holiday travel we see until year-end.

In short, it’s a pleasant and enjoyable month that brings a little oasis of peace, love, and fun into the year before we plunge into the frenzy of the festive season. So make sure you can enjoy each beautiful day to the max with these sweet deals, leaving you free to relax and have fun!

Smart shoppers know, however, that you don’t just wade in without doing your research. That’s why DealDump is here, to take the work out of it for you.

Never pay retail price again. Instead, find out what you can sniff out a great deal each month and what you should postpone buying until a better time. Then, keep the bargains fresh, find the lowest price, plan your shopping with ease, and save money while doing so- that’s the DealDump promise.

So welcome to September. Let’s find out what deals you can expect, what to find at the lowest price this month, and how not to spend your hard-earned bucks.

What deals can I expect in September?

September brings you the last opportunity for end-of-summer steals, but we’re moving away from them now. Apple fans are always eagerly awaiting news of upcoming new models, but Apple isn’t alone in releasing new lines at this time of year.

Everything from cars and bicycles to home appliances and denim is being cleared out to make room for incoming new models and lines- and that’s where you can save big this month.

Let’s make this September the best on record, and find you some deals you can’t afford to miss!

So, where should you spend your hard-earned cash this September? Let’s take a look!

Although probably not something you immediately thought of when looking for a hot deal. Bicycles can be a pricey purchase. Not if you buy in September, though! New bicycle models and lines are typically released in early fall, and they want to get old stock out the way.

So what does that mean for you? A fantastic discount on bike deals, that’s what!

Another unusual entry for our sales list is also the month of denim, especially jeans.

Whether the price drop is due to the upcoming fall season, new fashion lines incoming, or just the result of some historical manufacturer sales isn’t quite clear, but who cares- you’ll have a chance to look great! Again, excellent discounts will be everywhere.

3) The last of summer

While we addressed patio furniture, air-cons, lawnmowers, and summer clothing in August, as that’s typically when you’ll get the best balance of cost and variety, it’s still possible to snag a decent deal or two on outdoor furniture sales and other outdoor items in September as late discounts.

Labour Day weekend is always a great opportunity to pick up a great night’s sleep! Mattresses and linens are a cornerstone of the deals event for holiday sales, so if you’re in need, now is your time to…wait for it… spring for a good deal!

Who pays the street price when you can get it on amazing deals, right?

As with mattresses, home and kitchen appliances, both big and little, will go on sale over the holiday weekend.

From coffee makers to dishwashers, this is a great time to kit out your home with all the mod-cons at a fraction of the price, especially as they’ll be clearing space for the next year’s models at this point. Of course, we always see record price lows around this time.

This includes robot vacuums, by the way.

Apple fans, unite! If you missed out on getting yourself something exciting at Amazon Prime Day, this would be your last chance to get an excellent price until Cyber Monday.

Do understand that these sales are mostly in anticipation of new product announcements late in the month, so if you’re adverse to previous-generation models, this isn’t for you. If you want a great deal, however, get cracking.

Everything from iPhones to Airpods Pro will be discounted to move them out.

September is the most popular birth month in America. Historically, baby-focused retailers have celebrated this with September-focused sales on maternity items. So if you’re expecting- or planning- it’s the perfect time to get some great steals so you can stay stylish.

While you won’t be finding this one on Amazon (yet), this is also the time of year that dealerships clear out old car lines from last year in order to bring in new models for year-end.

So use the time to snag deep discounts on this expensive purchase if you’re in the market, as it’s your best chance at the lowest price possible for a while.

What you shouldn’t buy in September

So what should you leave off the list this month? Let’s take a look.

This is a staple of our skip lists, and for a good reason. When you buy in-season, the retailer gets to set the price according to high demand.

Skip fall clothing this month, and instead put your focus on netting the last great deals on summer gear and shoes instead, which will be at their lowest price right now. Of course, you always want to try and buy on season clearance sales.

If you miss out on a good electronics deal over the Labor day sales, forget it. Laptop deals are over, as are back-to-school kid deals on school supplies. Retailers will start putting their focus on Black Friday and Cyber Monday instead, and deals will be scarce on the ground.

If this one shocks you, it shouldn’t! Some retailers are guilty of rolling out seasonal decor hideously early to start raking in bucks. So don’t be the fool who buys right now.

Instead, wait until late September or early October, and you’ll see plenty of deals on all the spooky goodies you could want. It’s not a bad idea to start looking at candy on sale, however.

Alone among the home appliances, this isn’t a great time for buying a TV. Amazon Prime Day has been and gone, and Cyber Monday is approaching. So try to hold off on this one for now.

The big influx of toy and board game deals comes much later in the year, so unless it’s a disaster, try not to buy anything new for now. Of course, this includes game consoles, too.

This is one of the worst times of year to purchase jewelry. Labor day sales are going to try and convince you otherwise, but don’t fall for it! February brings the best deals of all, but you’ll get a better deal towards the end of the year, too, if it’s more urgent than that.

So September is a quiet month once the Labor Day sales pass, but that doesn’t mean there aren’t deals to be found.

On the contrary, anything that would have a new model incoming for the year-end, be that home appliances, cars, bicycles, or iPhones, stands a good chance of being discounted right now.

You’ve got one of the last chances before year-end to get a great electronics deal as the last of the school deals to happen, the perfect chance to get the moms-to-be in your life something special, and a nice chance to finish off the home renovations you started over summer with some appliance deals.

What more could you want?

More deals, of course! Don’t worry…. DealDump will be back next month with our spectacular guide to October deals, so stay tuned!